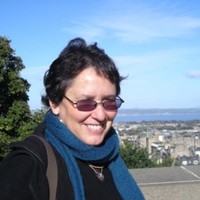 Susan Rubenstein DeMasi is the author of Henry Alsberg: The Driving Force of the New Deal Federal Writers’ Project (McFarland & Company 2016), as well as a screenwriter, playwright, and freelance journalist. She’s presented on the topic of the Federal Writers’ Project at various libraries, universities and other venues, including the Franklin D. Roosevelt Presidential Museum and the University of California at Berkeley. She’s served as a research associate for the Living New Deal (livingnewdeal.org) since 2017. Her dramatic writing includes the WPA-themed documentary play, Ten Thousand Stories, produced for both the stage and radio (starring Simon Jones). An adjunct librarian at Suffolk County Community College in New York, DeMasi has written for The New York Times and other publications, and is currently at work on an essay for an upcoming book on the Writers’ Project to be published by the University of Massachusetts Press.